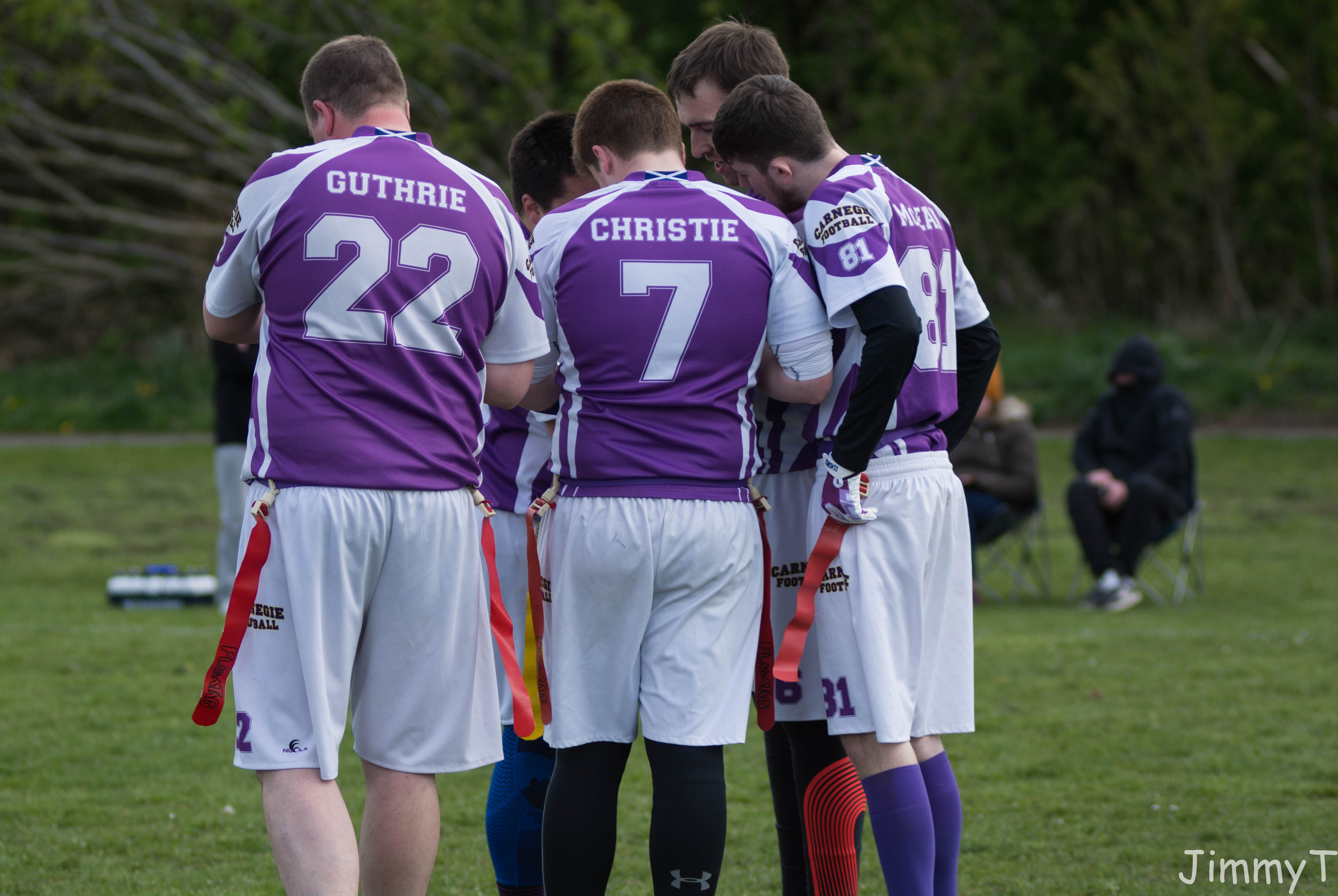 After a 9 week break, the Carnegie Renegades returned to action, in their final inter conference games, against an ever improving Midlothian Sabers and the ever impressive Edinburgh Outlaws,

There were grey sky’s looming in paisley with rain threatening where the Renegades eventually took to the field, they entered this game knowing every thing is a must win from here to the end of the season,
Renegades went out trying to brush the rust off and show they were a serious playoff team, the first half started well, with the Carnegie team methodically moving the ball up the field, exploiting gaps in the sabers defence so much so, they drove the ball up the field for the score with #9 hitting #81 for the first score of the game for the renegades in nearly two months, this happened a further seven times with the scores being spread through the team,
Renegades defence worked hard and well together to restrict the Sabers to 4 and out many a time, with Rian applying the pressure to the Sabers QB forcing rushed passes which fell short of their target of landed in the hands of the guys in purple with rain sacking the QB, and Guthrie calling the defensive shots, the renegades were beginning to look like a playoff team. Only conceding the two scores to finish the game 55-14
Mclean 81, 4 Td, 1 XP
Guthrie 22, 1 TD
Anderson 46, 2 TD, 2 XP1, 1 XP2
Nicol 21, 1TD
D Scott 34, 1 XP1
Robertson 25, 1 XP1

Edinburgh are a team full of talent and their league record does not do them justice, they are far better than the record suggests,
outlaws speed was something the Renegades would need to contain, but the Carnegie outfit made stride with their first drive, marching up the field, utilizing the speed of our “rookie” to cause problems for the outlaws safety, so much so they were able to generate the first score of the game, although they missed the XP, renegades were on a high and as the Edinburgh team took to the field Carnegie’s concentration lapsed allowing the outlaws to get the score and XP. The game ebbed and flowed with both teams driving down the field to the “redzone” with the difference being the ability to score, renegade struggled to do this only scoring 13 points in the half, outlaws seemed to exploit longer passes over the first line of the Renegades defence to get them open for the scores, closing out the half with 26 points, although the last score of the half was heavily contested and the outlaws “Chieftains” cap MARELLO came up trumps with the score.

The second half was a much different affair, with David Hogg of the Outlaws suffering a nasty ankle injury, so there was a shake up in the outlaws with a new QB and new Centre.
The renegades took the opportunity to try some new plays they have been working on, and these brought the most success with players getting open, and the speed and length of the blitz being neutralized, allowing the renegades to make the passes that would move them up the field, and although he didn’t score on the day, Mcinnes made good yards and runs in this game putting renegades in favorable positions.

Two of the renegades final score came from our second kitted convert D. Scott, making the score more respectable, just a shame the XPs couldn’t be converted, the outlaws matched the scores of the renegades going into the final thirty seconds, but had an unassailable 48 points, the renegades were playing for pride, and to make the points difference a little bit less.
Final play of the game shocked everyone! With Anderson getting the pass behind the LOS and not moving, instead he passed back to Dawkins, who uncharacteristically chose to run, splitting defenders twisting hips and tearing down the field going coast to coast for the score, the shock to everyone was evident.

This was by far the worst the renegades QB has played all season throwing 6 interceptions in acts of carelessness , not it all come Dow to the final week of the season 22/7/17 hosted by the CLYDE COMETS.