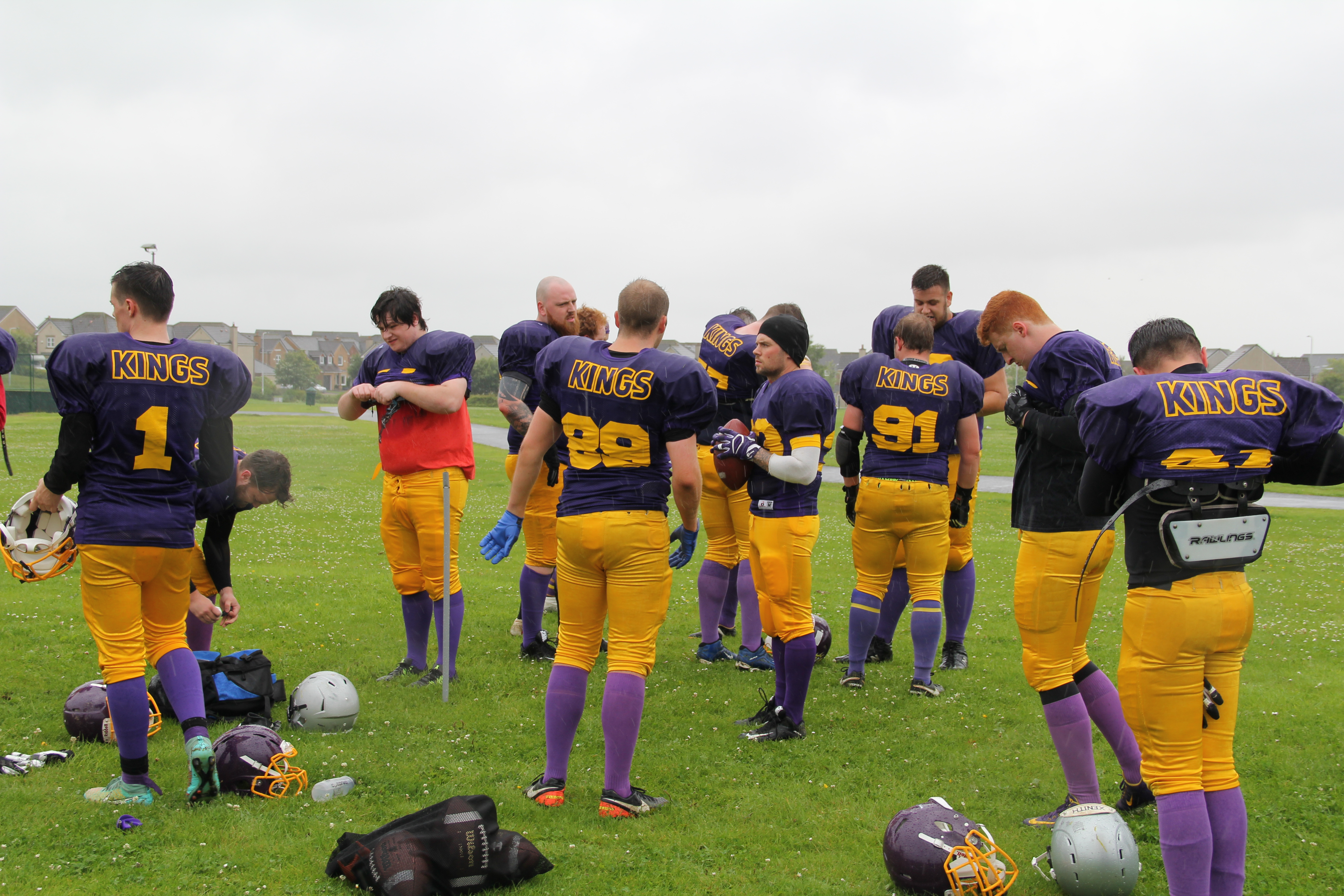 Our Dunfermline kings welcomed the Burnley Tornadoes on a wet and windy day to Duloch sports centre for another associate game, the return leg of the kings long trip down south a few weeks past.
With several key members of the team missing, meaning many kings playing out of position. With QB Daniel Picton on holiday, returning QB Fraser Reid, stepped in for his first start as Kings QB in over a year. Winning the Toss and electing to receive the kick off the kings got off to a flying start with running back Yoann Hubert making good progress with the inside run, thanks to a dominant Kings O line. With the Kings offence growing in confidence after two great runs by the powerful Hubert, QB Reid took to the air hitting slot receiver Stephen Nicol mid stride , who took off up the line, stiff arming a linebacker on the way to a fifteen yard catch and run. However the kings were called back due to a penalty.
Unfortunately this would be the story of the kings afternoon with successful play after successful play being called back for penalties. If the kings offence were successful, the Defence were dominant. Again with linebacker coach and defensive coverage caller Feargus Maher missing due to work commitments, Robert McDowall stepped in to run the D. The Kings defence, under McDowall, suffocated the tornados offence with Nose Tackle Richie Anderson particularly having success in brushing off blocks to get to the QB and ball carriers. On the rare occasions that the runners were getting to the second level they were met with a brick wall in the form of linebacker Andy Drysdale, who again put in a dominant display even pulling a runner down with one hand whilst on his back.
With the Kings D forcing the Tornadoes to punt it was back over to Reid and the Offence to capitalise. After an inside run where Yoann Hubert again showed deceptive power for his size in his runs after contact, the kings again took to the air with Reid connecting with returning Tight End Marc Boswell with an excellent pass. Boswell, securing the ball and turning up field, picked up some excellent blocks from Hubert and Wide Receiver Scott Donn to take the ball over 50 yards for the score. Unfortunately the Kings attempt at two extra points was unsuccessful with the ball just out of reach for wideout Brendan Mcfarlane. KINGS LEAD 6-0.

The Kings D, taking over, again were dominant in their play with the secondary, under safety Dougie Scott, breaking up most passes through the air or tackling receivers at the catch. Throughout the game the secondary would prove their worth, with corner Greig reid coming away with two interceptions, linebacker Juraj Koller getting one and Dougie Scott coming away with one. The Kings D could have had more, however with the conditions balls were dropped, that on another day would have been returned by the speedy Kings D.

After trading turnover on downs, the Kings Offence again got clicking with QB Reid finding his tight end who again managed to get in for the score, however this time it was called back for to many in the backfield. The Tornadoes and Kings then traded turnovers on downs until the half on what was becoming a frustrating day for the Kings Offence and Coach Alistair Choat. The Offence were clicking and playing well, but penalties were proving costly.

In the second half the Tornados D found more success is stopping the run. However, far from being fazed by this, the kings QB Reid, adjusted accordingly to return to the air with his passing game, finding his receivers to move the chains. With the success through the air, Reid threw a pinpoint pass to Koller, who picking up blocks from Receiver Nicol and Tight end Boswell and a rare appearance downfield from Offensive Lineman Craig Robertson, found the corner of the end zone. Unfortunately, again the score was ruled out for a penalty.

Burnley could feel that it might be their day and with the growing confidence managed to find small gaps in the defence that, along with fortunate field position, led to the score and having missed the PAT, a tied game. Further turnovers between offences showed just how close the game was, with penalties still costing the kings going into the fourth quarter.

The Fourth Quarter continued much the same as the first three with turnover after turnover. Fortunately the kings seemed to have reduced the number of penalties. After a Burnley punt and kings turnover, the Tornadoes were in field goal range. As the ball was snapped however, Richie Anderson ghosted between Offensive linemen to get in the kickers face, block the kick and come up with the ball. However, penalties again cost the kings O resulting in being driven back to their own goal line and then a turnover. A big ask for the kings D who remained resolute, stopping the Tornadoes on the first two downs. Unfortunately on the third, Burnley’s running back found the corner of the endzone for the score. Again the Pat was no good and therefore Burnley led 12-6. Following a turn over from the kings O and with the clock running down, Burnley chose to take a knee and end the game with the win.

On a day that could have ended so differently, the Kings O will rue the penalties given away and thank their D for keeping them in the game. Another associate game is complete and the kings will return to practice with lessons learned and begin their work towards the next game, the highland stags in Inverness on the 13th of august. In what was Coach Choat’s first game as HC, deputising for the kings usual HC who was ill, he can be extremely satisfied with his teams play and his play calling. With many positives to build on, and several players to return, things continue to look good for the Kings in their quest for league football.