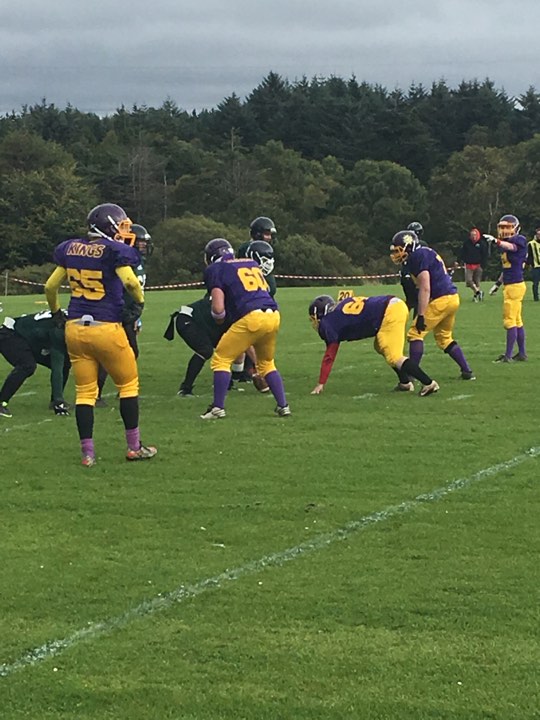 Sunday 13/8/2017 The Dunfermline Kings have a traveled long to Invergordon, north of Inverness, for a friendly rematch against the Highland Stags on their own turf.

With the Captains having met in center field. The Stags win the toss and elect to defer. Dunfermline choose to receive the ball. A long kick for the Stags starts the Kings off on the 20 yard line.

Dunfermline’s Offense takes to the field. A stifling Stags defense forces a three and out on the first drive for Kings.

Highland’s ball. Running the effective Double-Wing offense, the Stags took the field looking to improve on the first game. The Kings defense aiming for a much better outing themselves. The Stags would march quickly up the field into the Kings redzone. Looking to open the scoring early. Following a tough stand from the Kings D on the 2 yard line. The Stags would score on the next play due to poor tackling from the Kings linebackers. 6-0 Stags. Highland choose to go for 2. A quick run from QB Chris Shaw would secure those 2 points. 8-0 Stags.

Stags Kickoff. Another touchback. Kings ball on the 20. QB Daniel Picton leading the Kings Offense onto the field. The Stags defense would once again stifle Dunfermline, forcing another 3 and out. Kings Punt.

Stags ball just inside their own half. Two big plays later and the Stags are knocking on the door to Lings endzone once again. After a few penalties and some short plays for minimal. The Stags would punch it in for the score. 12-0 Stags. 2 point conversion. The Kings would force an incompletion keeping the score at 12-0 Stags.

Stags kickoff. A short return from KR Fraser Reid would set the Kings offense up on the 24 yard line. The Kings would feel a spark in the Offense and with multiple short gains. Began to set themselves up nicely within Stags territory. A fumble would halt the drive. Turnover for the Stags.

Starting in their own half, the Stags go with the run game. One long run later and the Stags are in the Kings redzone for a third time. Some short plays later, the 1st quarter is over.

2nd quarter. Stags ball in the endzone. QB Shaw would quickly find his receiver for 6. 18-0 Stags.

Kickoff Stags. A short kick after switching sides pulled the Kings returners up and KR Reid would bobble the catch resulting in a fumble. Stags recover.

Finding some groove the Kings defense would force a 3 and out on the Stags next drive. Being within the Kings half. Highland would go for it on 4th down. Tackles by CB Grieg Reid and LB Fearghus Maher would end run by the Stags. The first stop of the day for the struggling Kings.

Kings ball in their own half. Following a key stop on Defense, the Kings offense would pick up where they left off on Offense prior to the turnover. Long runs by RB Gavin Cullen kept Dunfermline marching down the field. QB Picton following them up with a short pass to WR Scott McCracken. The Offensive drive would be cut short but yet another fumble from the Kings. Stags ball.

On the ensuing drive Dunfermline’s offense would attempt to capitalise on the good field position. The Stags would look to recover the ball once more. Having done so on their last two defensive outings. A short pass from QB Picton being picked off by LB Billy Mill, would end the Kings drive as soon as it began. Stags ball.

A short drive to close out the first half of the game. The Stags offense would struggle to add to their score, despite efforts from their QB and Rb’s. The Kings would prevent the score to end the half.

Dunfermline kickoff following half time. Stags ball after a good return. The Kings defense would hold the Stags to a quick 3 and out forcing the punt. A muffed catch would result in the Stags recovering the ball. Remains Stags ball.

With excellent field position following the recovery. The Stags would punch the ball in for the score on a short run up the middle. 24-0 Stags. The 2 point conversion resulting in an incompletion.

Stags kickoff. A deep kick to KR Scott McCracken, results in an excellent return with solid blocking from he return team, setting up the Offense with great field position inside the Stags 30 yard line. The Kings offense would take to the field with vigor. Beginning to put together a drive on short runs from RB Yoann Hubert and RB Gavin Cullen. QB Picton would run a QB keeper and get the Kings on the scoreboard. TOUCHDOWN KINGS! 24-6 Stags. Going for 2 on a pass to RB Cullen, QB Daniel Picton would find his target for 2 points. 24-8 Stags.

Kings kickoff. A solid return to the 50 yard line, setting the Stags up nicely. Highland finding their rhythm once again, punch in another score for 6 with RB Scott Maclennan. 30-8 Stags. The 2 point conversion being successful making it 32-8 Stags.

Highlands kickoff team taking the field once more. Kicking it deep. Touchback Kings. Dunfermline, looking to follow up their last drive with another TD would struggle against the stout Highland defense. Electing to go for the 1st down on 4th and 10. The Kings come up short. Turnover on downs. Highland ball.

Stags offense taking the field looking to add to their lead. Going to the run game once more, the Stags would capitilise on the drained Kings defense. Short consecutive runs for gains, leading to the Stags once more in Dunfermline territory. Sticking with the run, the Stags score a few plays later. 38-8 Stags. The 2 point conversion falling short of the endzone.

Kings return the Kickoff to the 30 yard line. The 3rd quarter coming to an end a few plays later.

4th Quarter. Kings ball. Highland force another 3 and out, the Kings choosing to go for it on 4th down with nothing to lose. An incomplete pass. Turnover on downs.

Stags ball. Highland sticking with their effective run game against a tired Kings Defense, find rhythm once more. Sideline to sideline runs continues to tire the Kings defense out. Making big gains for the Stags offense. QB Chris Shaw adding to the gains with short completions and a solid QB run. Finding themselves in Kings territory once more. The Stags look to add to their substantial lead. Sticking with the ground game. The Stags punch the ball in once more. Stags touchdown. 44-8 Highland. F

Ailing to convert the 2 points the scoreline remains the same.
Stags kickoff. Dunfermline ball. RBs Hubert and McCracken struggling to gain much against the tough defense of the Stags. QB Picton would elect to go to the pass. Finding WR Cammy Scott on a hail Mary. TOUCHDOWN KINGS! 44-14 Stags. Dunfermline going for 2, failing to punch the ball in.

Kings kickoff. Highlands ball after an ample return to the 30 yard line. With a mere 7 minutes left in the game, the Stags look to add to the scoreline. The Kings now playing for pride would not go down easily. As the clock runs down, the Stags take all three timeouts in order to give themselves a scoring chance. The Kings defense would not allow this, getting two Sacks from their LBs and D-Line. The clock runs down to zero. Ending a long hard day in Invergordon.
44-14 Stags. Dunfermline will need to vastly imrpove for the next outing against the Highland Stags on September 10th at Duloch Community Leisure Centre