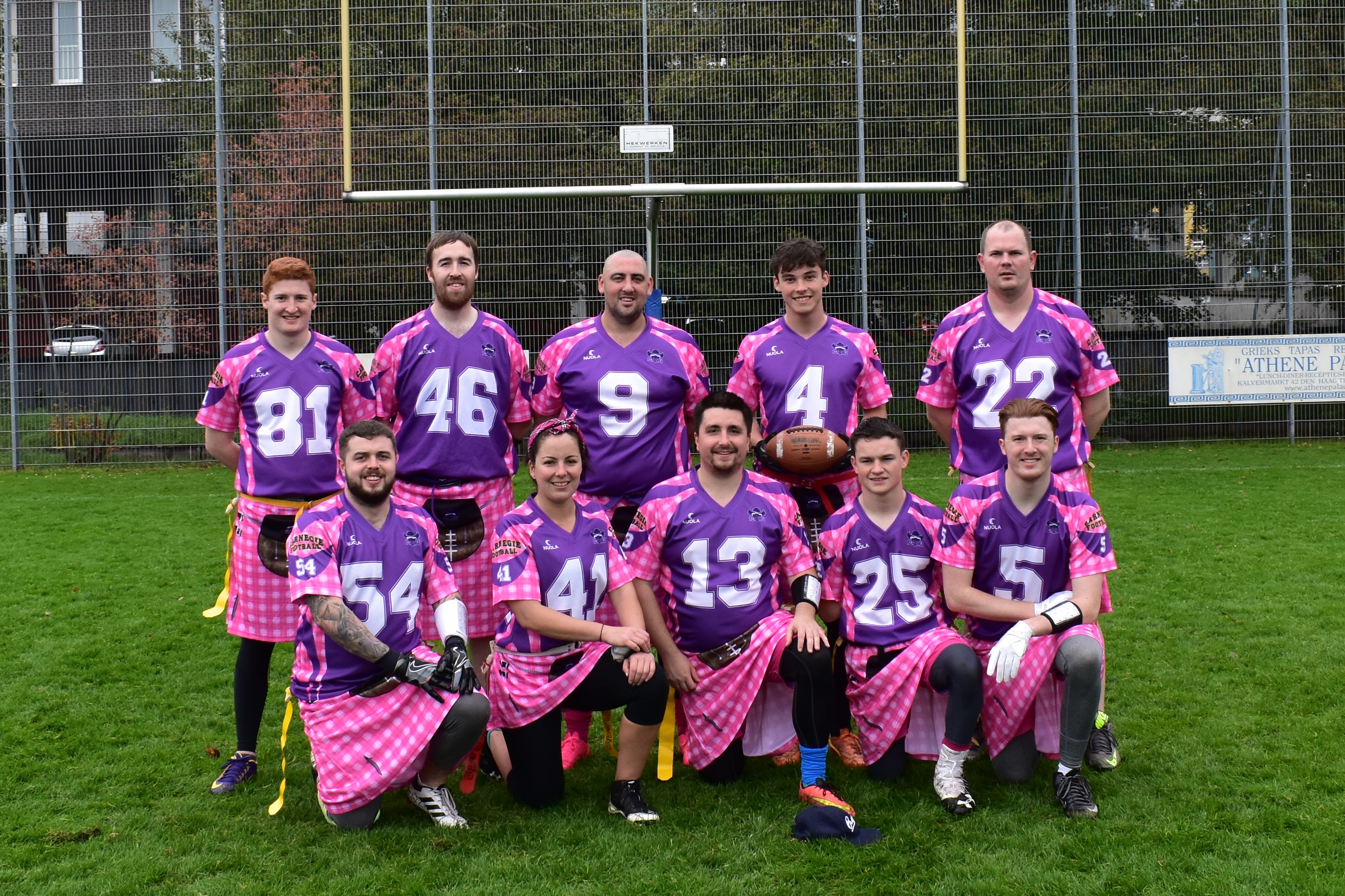 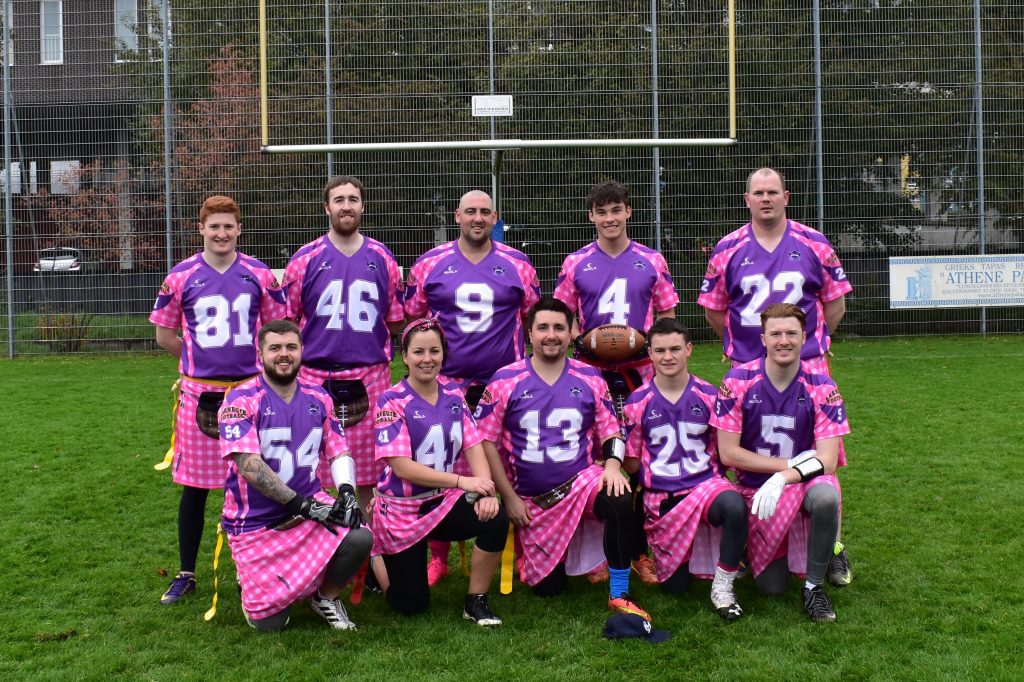 PINK BOWL 4 hosted by Hague Hyenas would be Carnegie footballs first foray into European tournament football, to say we were excited would be an understatement, we took a mix of players from both Carnegie flag football teams and a special guest for the weekend from Glasgow Hornets.

The team arrived in Amsterdam on Friday afternoon and travelled down to The Hague to their accommodation for the weekend, the team got settled in and made for a local park to go through some final walk throughs before dinner. 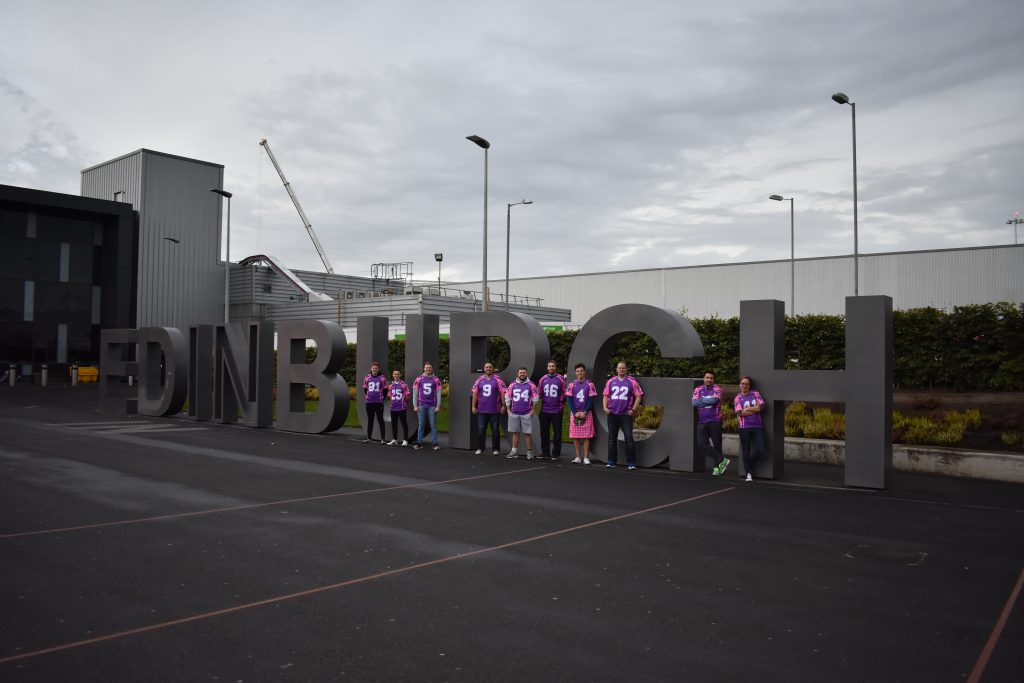 We started our tournament against United Athletes from Holland, we were able to see what this team was capable of from watching a few of their games on their Facebook page https://www.facebook.com/uaflagteam/

We felt ready for the game everyone knew their roles, what we weren’t ready for was the added athleticism and speed of the players in Europe, we quickly found our feet after going a score down, after some composed offensive play we made the break through with Aly O’Mahony breaking a tackle and running the length of the field for the score to tie the game, after what was a really enjoyable battle for both teams, Carnegie finished the first game with a tie 20-20 Aly scoring three and Stu Anderson scoring two of the extra points.

We had a long break until our next game as the PINK PIRATES had withdrawn the previous day giving us and automatic 20-0 victory.

In what should be Team Carnegie’s 3rd game of the day, they took on arguably one of Spain’s larger team and 2016/17 league and cup champions BARCELONA PAGESOS.

This was to be a very tough defensive game, with both teams holding the other to 4 downs and out , until the recognition that there was a big hole in the middle of Barcelona’s defence, and so Carnegie began to exploit that and drove up the field utilising Anderson at centre and the throwing abilities of F Reid and A O’Mahony until eventually we got the result we needed, a score from Anderson and the XO conversion from O’Mahony again the game went back and forth trading turnovers, and with both teams scoring but not converting the XP, the game finished 13-13 … another tie, would this haunt us later on in the tournament … we shall see, 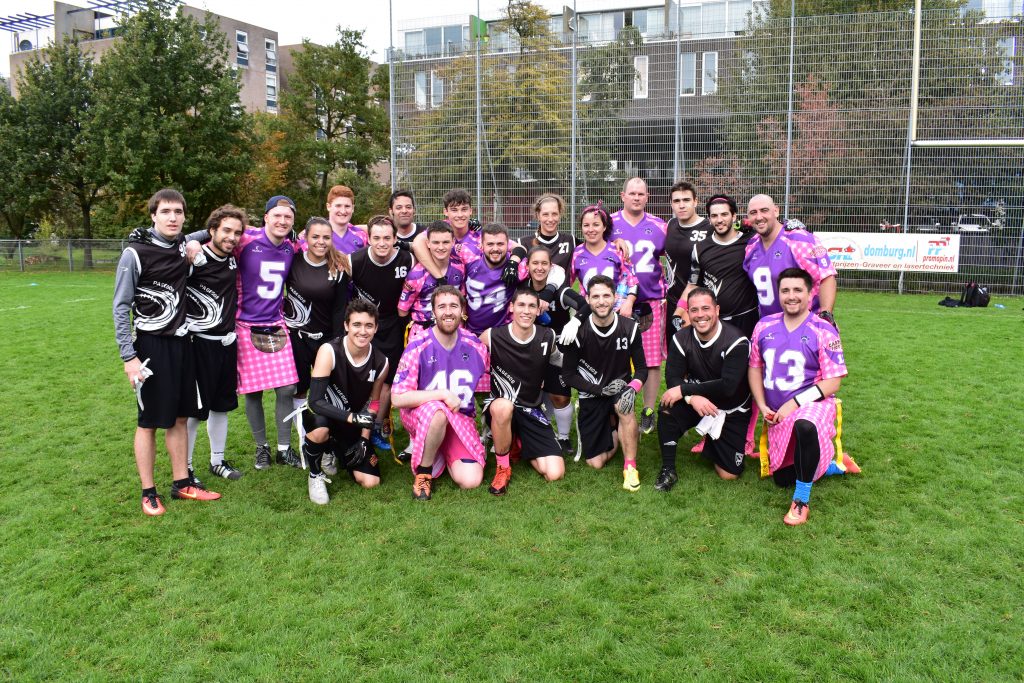 Game 4 was against Pumerend Barbarians1, this was a nervous game as we had seen that the previous week Pumerend put 196 points up against their opposition, but nonetheless we were there to compete, and compete we did.

First couple of plays we tested the water to see where there was space, and boom with Rian Robertson and Aly on the field we exploited their lack of speed and how close they sat up on us , so we sent Rian deep, he caught the pass and made the score.

Carnegie kept the pressure on and added a few more scores with Rian adding another and Anderson getting two him self.

The game ended 26-6 Carnegie had earned their first win in European flag football. 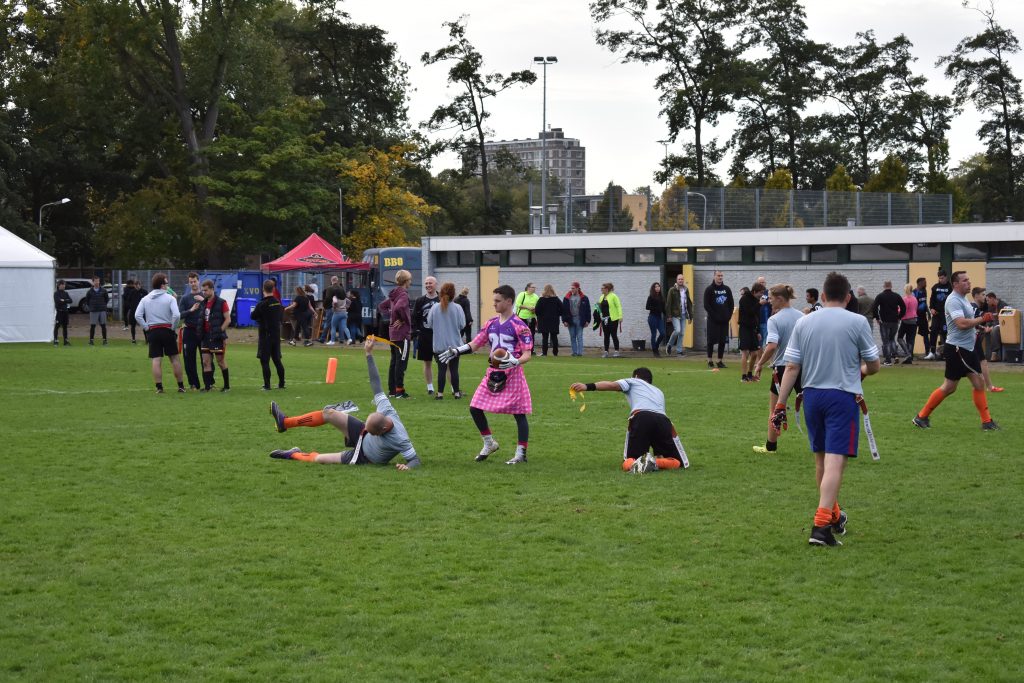 Game 5, against the French Iron Nuts and their reversible iron man kits.

We were playing this right after playing the barbarians and we were a little sluggish to say the least, but that’s not t an excuse we were outclassed and beaten by better athletes, although the score could’ve been much worse 26-6 is acceptable in a shortened game where they were better in most areas of the field. 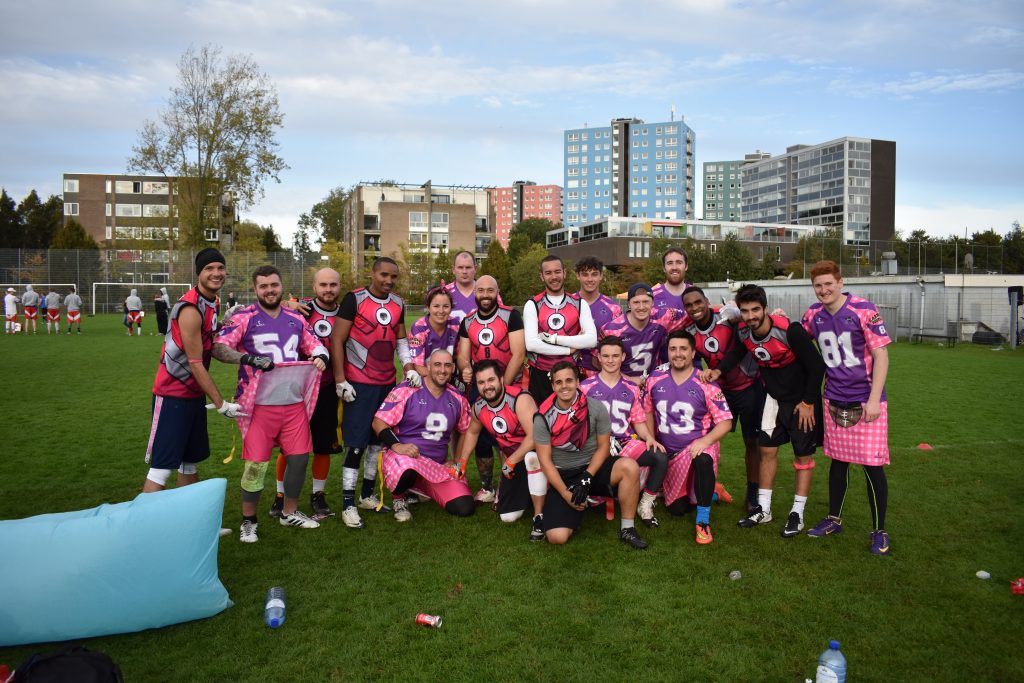 The ends of group play on day one and Carnegie finishes with 2 wins, 2 draws and 1 loss.

Day 2, and over night Carnegie found out we would be playing for 17th to 24th place, missing out on a top 16 spot by 12 points, the team was gutted, but still 3 games to play, and in our first game we came up against Moscow Tough Nuts.

The intensity and duration of day one seemed to catch up with the team on day two, and coming up against a well organised intense team, our backs were against the wall, from the outset. For a Sunday morning the speed of the Russians was something else. Carnegie tried their hardest to get something from the game but in the end Tough Nuts were just a better team and deserved the 26-0 scoreline 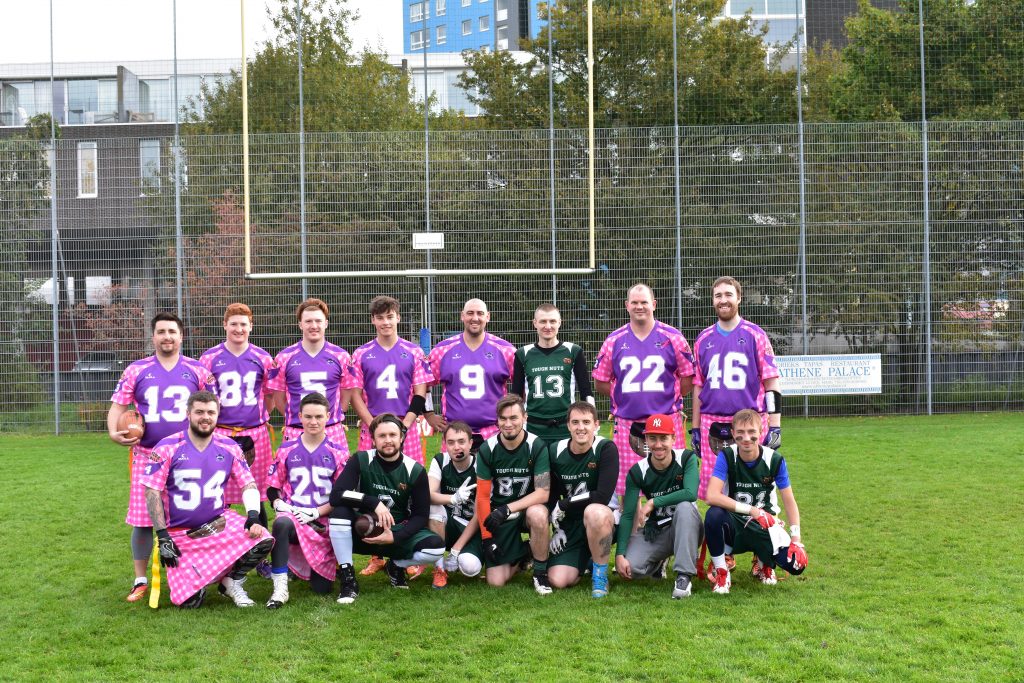 We would now be playing for 21st to 24th place, up next Utrecht Dominators.

We had built a good relationship with these guys, having a laugh throughout the tournament.

Both teams were very evenly matched, and this remains a stalemate for the majority of the gamer he first half finished 12-6 to Carnegie with some smart play calls from the sidelines to allow our break through, the defence worked like troopers to stifle the dominators offence allowing our offence to burn the clock and take the win. 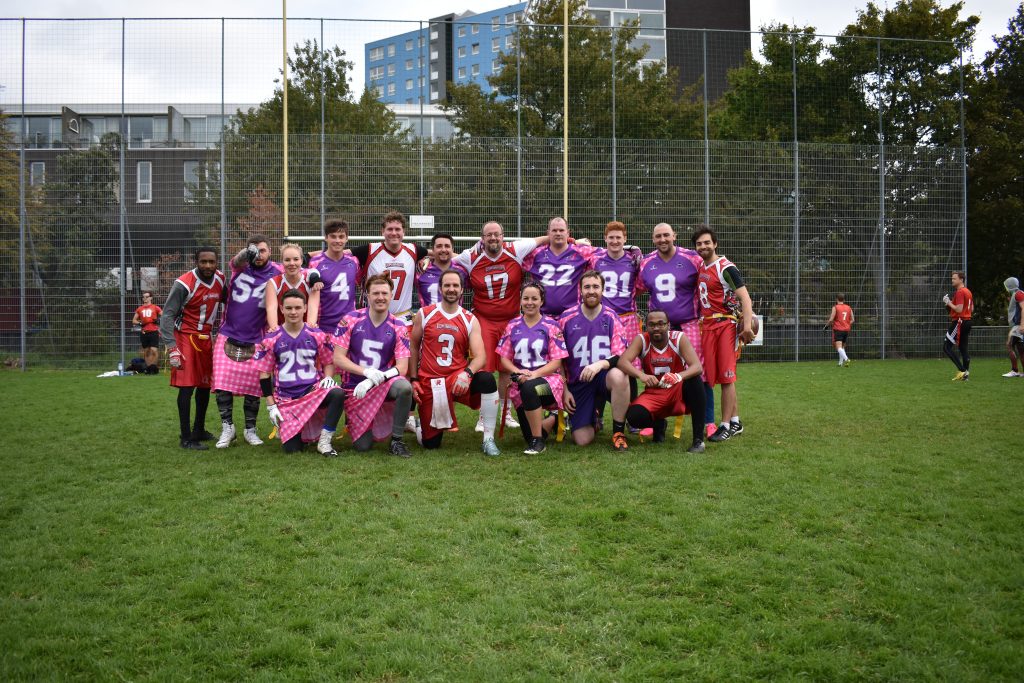 Final game of Pink Bowl 4 and we get Pink Bulls, another young, athletic, Hungry team.

We were truly feeling it after 8games of football and 7 referee assignments, for the final game, knowing we could do no worse than 22nd, we tried a few different things, allowing Fraser Reid to QB, and some different guys in different spots, these changes didn’t work for us, but we were not about to make a snap decision to move folk about again, so we let these guys run out the game, unfortunately we were destined to lose 21-7 (I think) but this was a great game played in great spirits. 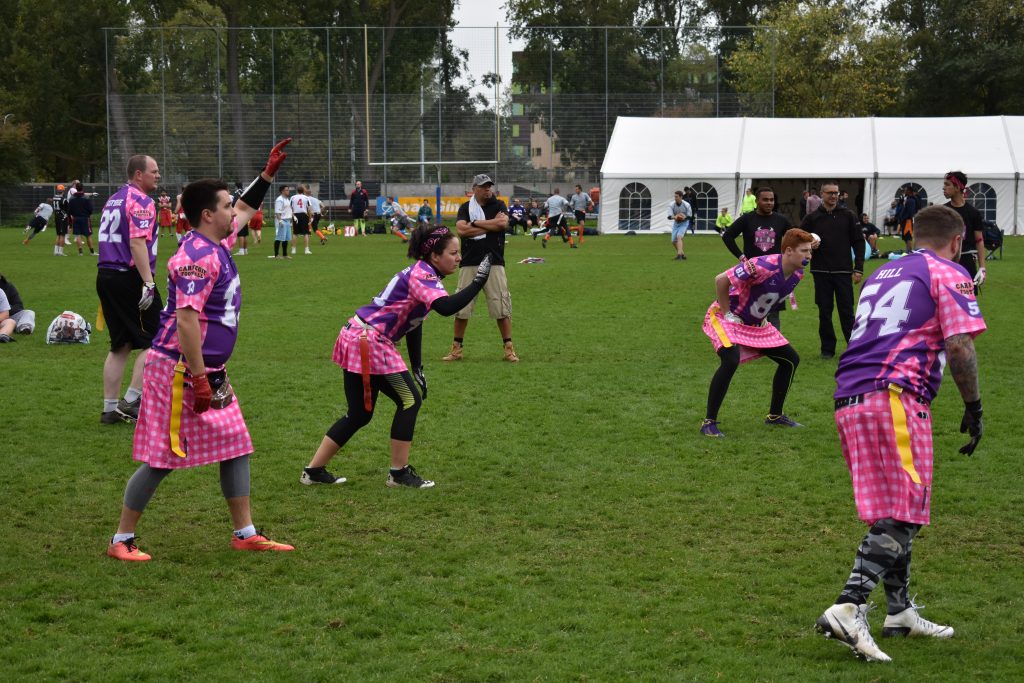 Overall this was a great testing ground for Carnegie Football, in a tournament for a worthy cause. The team and club knows now that to compete they need to be more clinical, a lot fitter and athletic, but also be much more adaptable to the opposition to exploit their weaknesses.

Carnegie Football would also like to congratulate the winners Waldorf Wanderers (men’s) and team Mexico (Women’s). And also express our thanks to Christiaan Dankers and his crew from r hosting and running a successful tournament, which I hope Carnegie Football can make another appearance at. 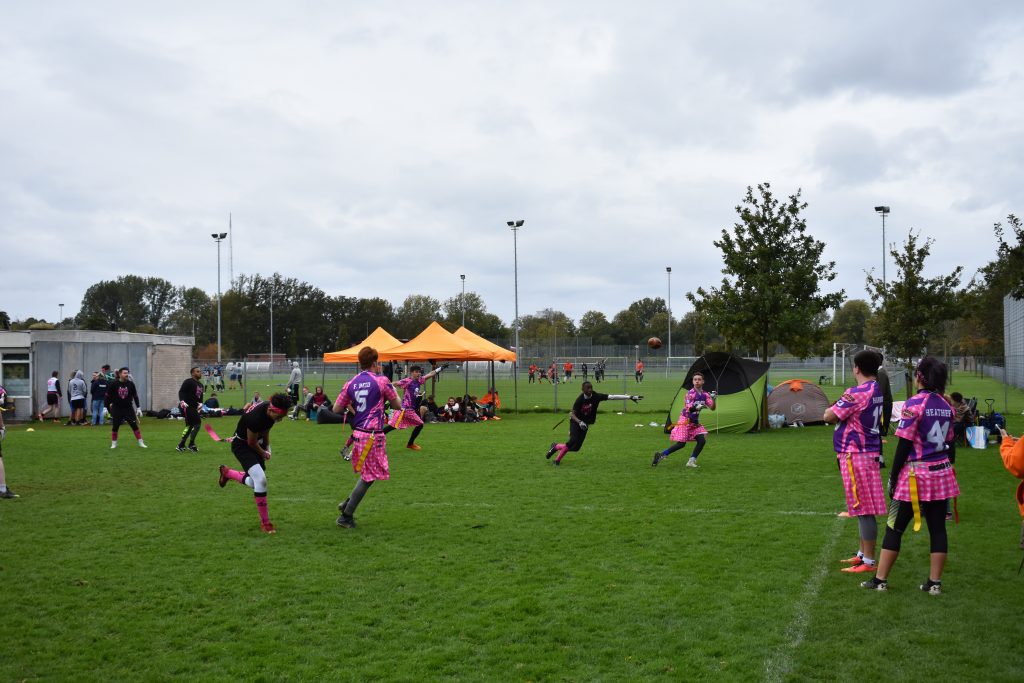