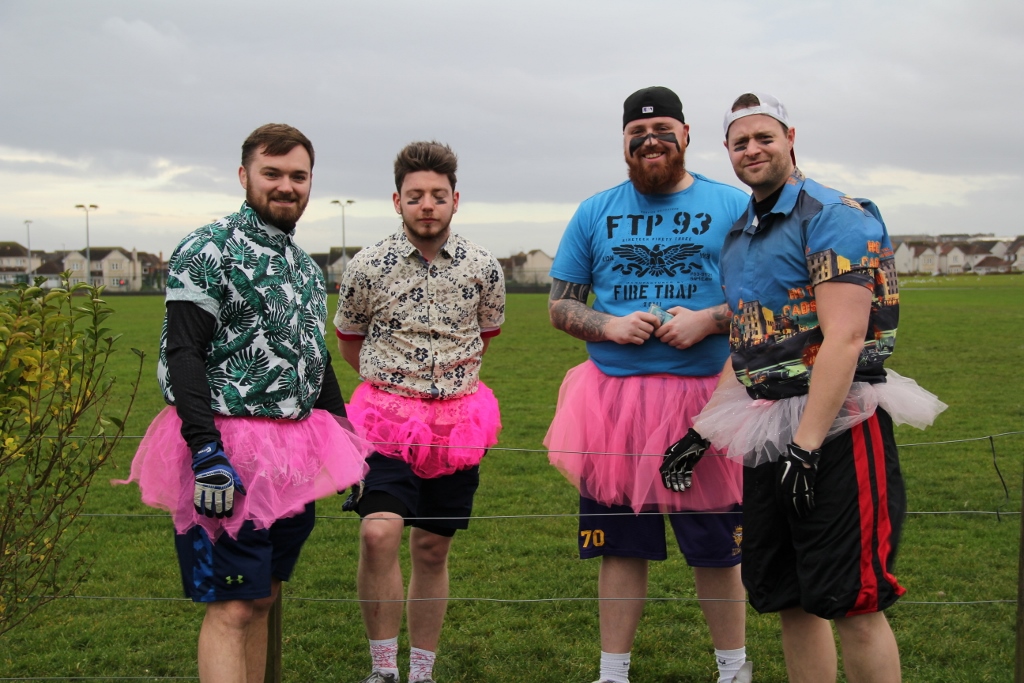 There is not many opportunities in the year that 12 teams from all over Scotland come together in Fancy Dress to play some American Football however that is exactly what happened on Sunday 11th December 2016 at Duloch Leisure Centre in Dunfermline where Carnegie American Football club hosted the “Fight Like A Girl” Flag Football Tournament.
Teams from both the Flag and Tackle BAFA leagues, as well as newcomers,friends and family came to together for a great cause for Dunfermline Kings very own Alex Paterson in support of his daughter Ellie.

The tournament itself was very successful with each game providing a good level of competition and with a lot of fun in light of the fancy dress which seen everything from Spiderman, Pink Power Ranger, Danger Mouse, Father Christmas, terrible Christmas Jumpers and the Cast of Top Gun on display to name just a few. Teams included the Dunfermline Kings, Carnegie Renegades, Carnegie Steelers, Carnegie Thunder, Dunbeth Dragons, Tigers, East Kilbride Pirates, Grangemouth Broncos, Sambro Seahawks ,Dumfries Hunters and Top Guns.

The teams were split into 2 groups over 4 fields to provide as much playing time as possible for each team which would take the top 2 teams and they would contest in the final of the Fight Like a Girl Tournament to claim the prestigious Fight Like a Girl Teddy. There was some very close games from both fields however it was the Carnegie Renegades from Group 1 and the Grangemouth Broncos who won there respective groups.

It was a very close game going back and forward scoring on each drive with not many chances to open up a big lead and it came down to the last play of the game in which the Renegdaes throw into the end zone which was intercepted by the Grangemouth Broncos Defence and giving the narrow 26-21 win to the Broncos. It was a great show for those staying behind in the dying light and also to celebrate the trophies for both 1st placed Broncos and 2nd placed Carnegie Renegades team as well as MVP for the day whith the honours going to Broncos own Kevin Woods(Spiderman) for his exceptional play throughout the day upon feedback from all players,refs and volounteers on the day.

We would like to thank everyone for there support and all that donated as Carnegie American Football Club raised an incredible £700 on the day. This will be presented to Alex shortly and we will provide an update soon when we hand this over to Coach Alex. If you did not get a chance to donate on the day please use the link below.