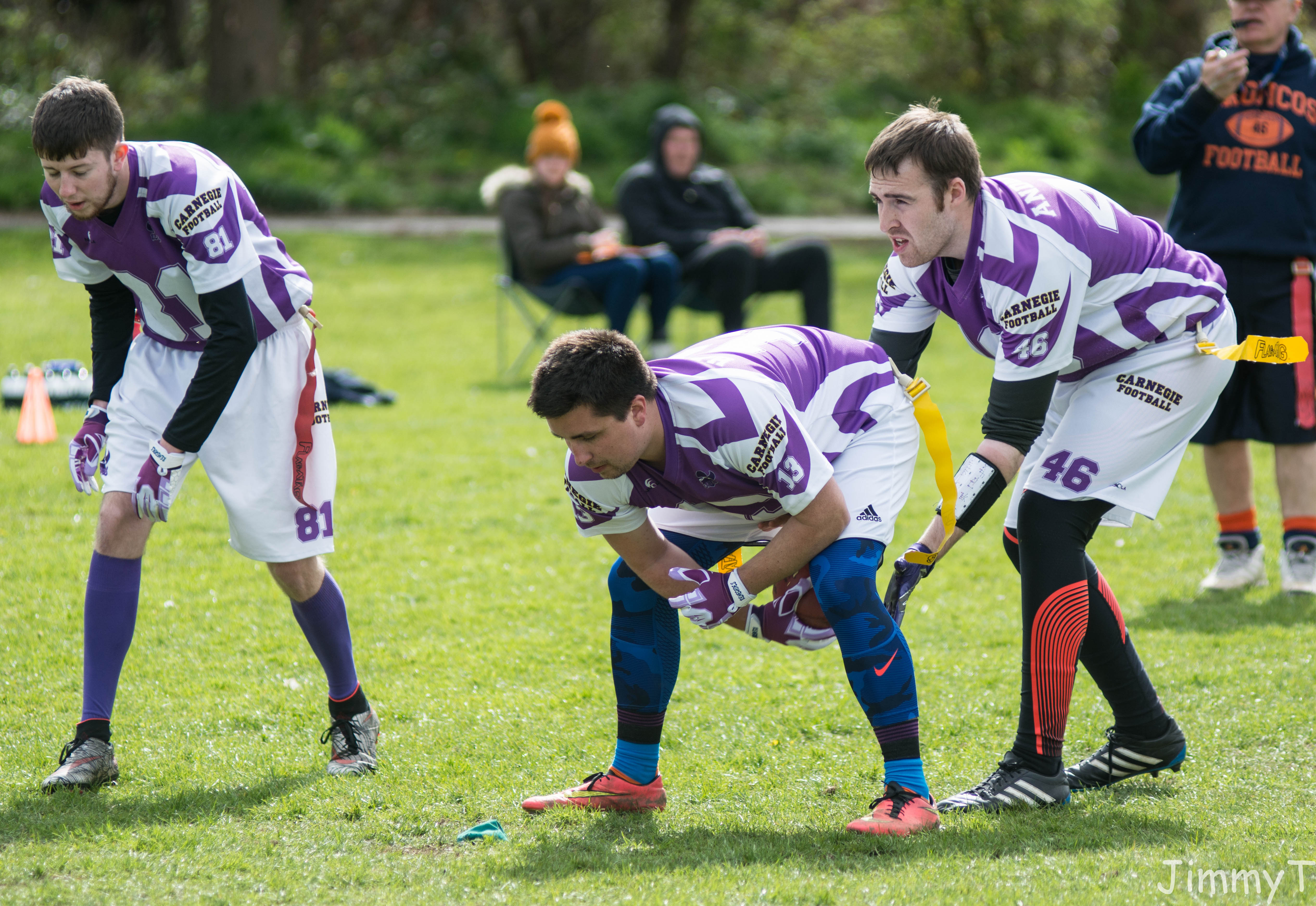 In the Renegades Week 2 Fixtures they were to come up against the Grangemouth Broncos and also the Carnegie Steelers in our inter club derby game. After coming off of 2 Victories in Week 1 against the Clyde Comets and the Paisley Spartans confidence was high however only having 7 players for week 2 was going to make it difficult.

The First game of the day the Renegades came up against the broncos a team which has seen a huge improvement on an already established team. After watching them out perform the Aberdeen Oilcats in the first half of their first game we knew we were in for a tough day. QB Stuart Harwood was back in action for the Renegades after missing week 1 due to work commitments he would start the game and lead the first drive for the Renegades. In what would only be explained as a one sided affair the Broncos played extremely well taking an early lead and never looking back. As 4 of our 7 Players were on refereeing duties in the previous game giving them limited warmup time it took a while to get a drive going up the field but there was at times glimmers of what could have been however it was getting us prepared for the game afterwards against the Steelers. The Second Half of the Broncos game saw Stuart Anderson get his first experience as a QB in League play and had a few drives up the field and after picking up an Interception and returning it to the 20 yard line it gave him the best chance to get the TD to avoid the wooden spoon. We did end up with the ball in the end zone twice however both were ruled out due to blocking the Blitzer and the final attempt on 4th down was slightly over thrown stopping the Renegades from getting the score.

We knew it wasn’t going to be easy this one and the game ended with the Broncos winning 59-0. 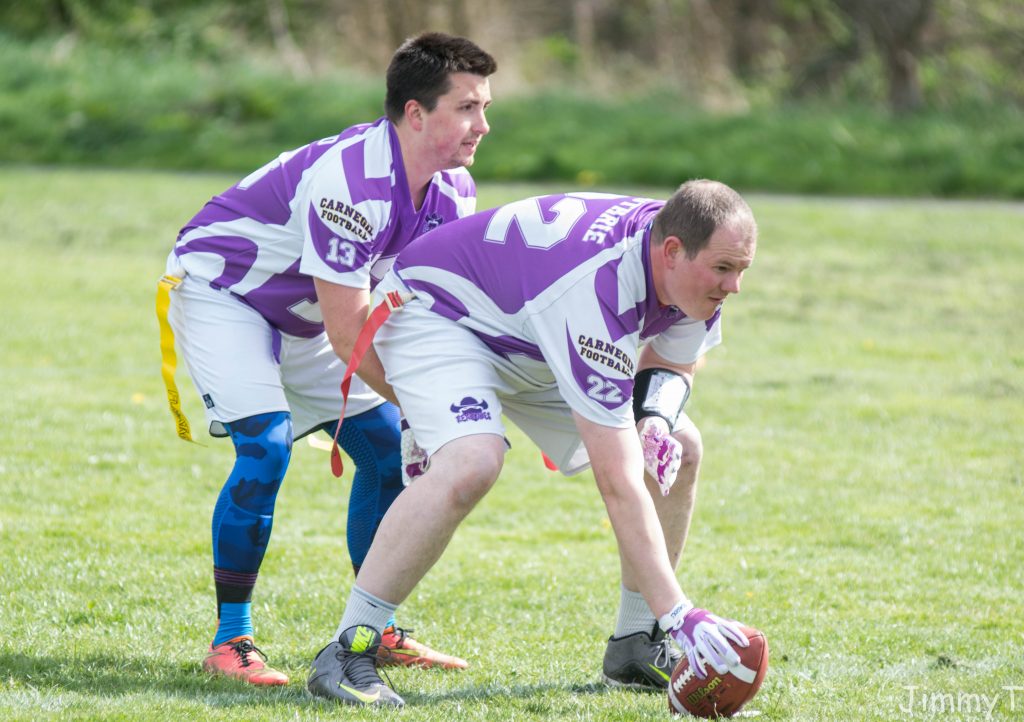 In what is our only game against the Steelers this season after finishing 1-1 last year against the Steelers this was the game we wanted to win. Bragging rights in training for another year and another win closer to the playoffs some of the team goals in the inter club derby game. Regularly training against the Steelers we knew what to expect on the Defence and who their offensive targets could be. After getting a beat down by the Broncos we were more than warmed up and ready for this one. Getting the Nod at QB was Rookie Stuart Anderson with Stuart Harwood at Centre, Ross Mclean at Receiver, Lewis Christie at Receiver and the veteran Kirkcaldy Bull John Guthrie in at Slot Receiver. The Steelers took the early lead through Grieg Reid giving them the 6-0 lead early and it wasn’t long before half time that the Renegades pulled one back with Stuart Harwood catching the TD to tie the game at 6-6 at the half. 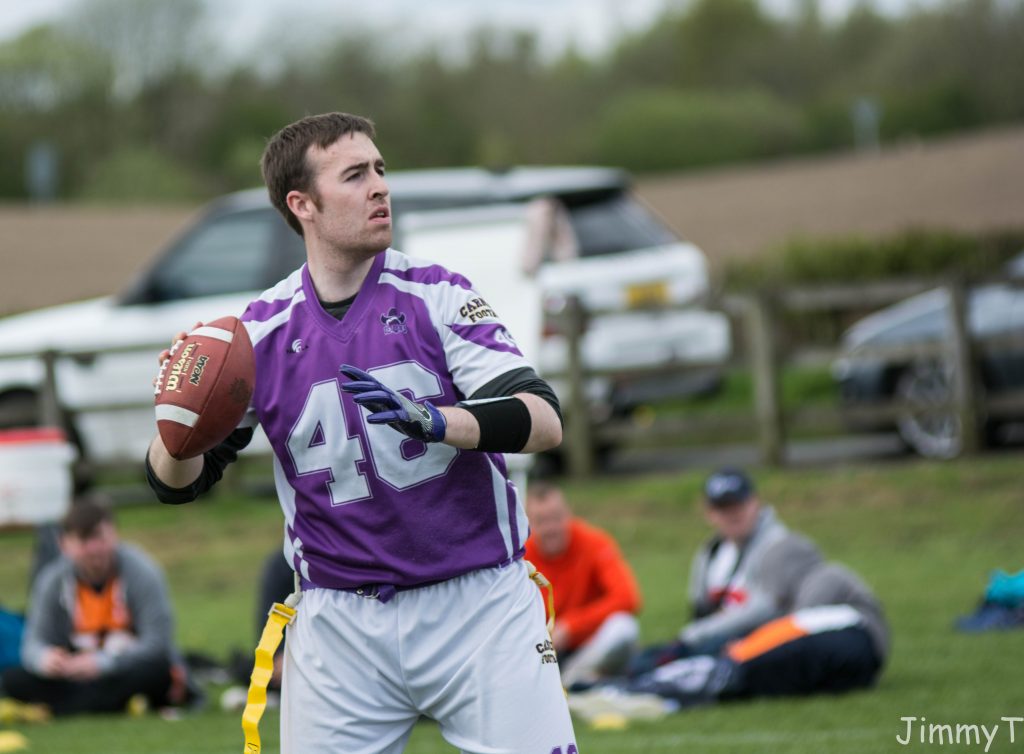 Into the second half and the Steelers got off the mark quickly with a TD to Chan Phung giving them the 13-6 lead. The Defence then took the lead for the Renegades with 3 interceptions in the second half the first coming from Dougie Scott and then by Stuart Anderson. This helped close the game up 13-12 to the Steelers after missing the XP. It was the last 5minutes that won the game for the Renegades and on the next Steelers drive John Guthrie sacked the QB on 4th down turning the ball over and giving it back to the Renegades to try take the lead and after the sack then came the TD also from John Guthrie running it in to give the Renegades a 19-13 Lead with the XP being converted afterwards by Lewis Christie. Knowing a solid stop on defence would give us the win with not much time on the clock Ross Mclean came up with a huge Interception and running it back into the End Zone for the Pick 6 play of the game giving the Renegades the 25-13 Lead with around 3minutes now left on the clock. The final drive from the Steelers saw them work their way up the field leaving them with 30 seconds on the clock for the score when Stuart Anderson caught and Interception only to be ruled back by a flag due to a player crossing the line of scrimmage illegally. Steelers got the ball back and scored however with Greig Reid Catching the TD and Aly O’Mahoney the XP. Renegades having the ball back with 24 seconds on the clock took the knee and ran out the clock giving the Renegades a Valuable 25-20 win taking them to 3-2 for the season and equalling our win record for last season already.

Next up for the Renegades is another tough weekend against the Aberdeen Oilcats and also the Dunbeth Dragon both of whom made the playoffs in 2016. These games will be hosted by the Renegades on Sunday May 7th 2017 from 10am.