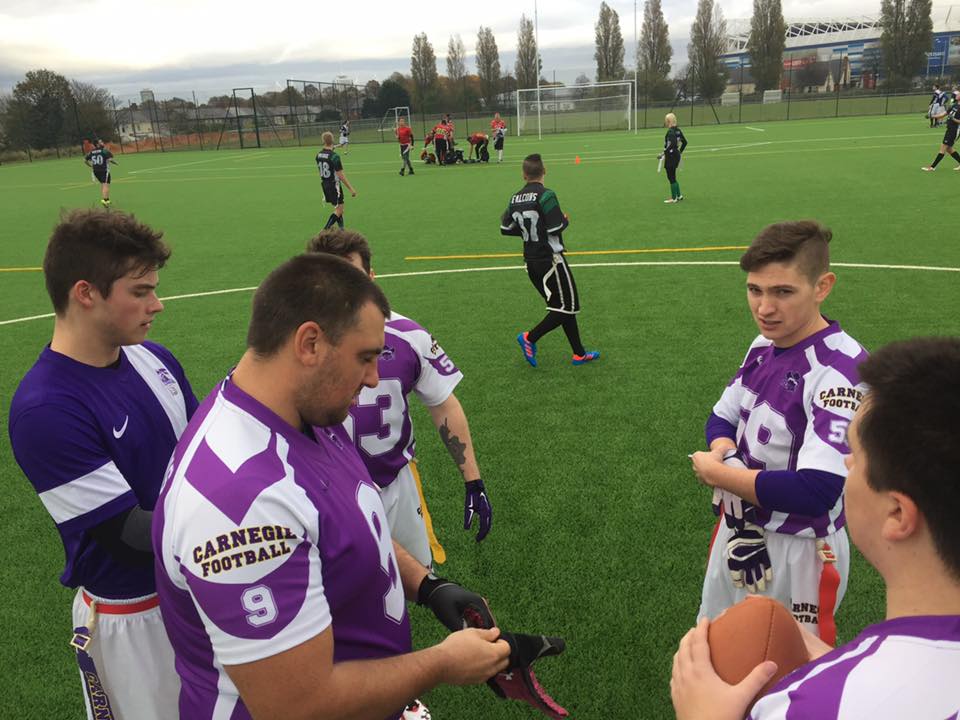 This weekend saw the Carnegie Renegades in their first cross border trip as a team when they went to the Marcus Price Memorial tournament hosted and arranged by Lewis David Phillips of the Exeter Falcons. The Renegades had a small squad of only 8 players of the 20 or so available limited by the size of the mini bus they could legally drive to Wales. The games were 12 minute halves with no time outs to try and get through the 5 games per team and the squad consisted of Ross Dawkins, John Guthrie, Stuart Anderson, Stuart Harwood, John Souter, Garry McInness, Chris Bailey and Aly O’Mahoney

It was a fantastic day of football and all for a good cause which can still be donated to at https://www.justgiving.com/fu…/MarcusPriceMemorialTournament

Game 1
Newcastle Blackhawks 19 – 6 Carnegie Renegades
First up the Renegades faced an old foe in the Newcastle Blackhawks. The last time these teams met the Renegades were still the Revolution and that game ended in a narrow victory to the Fife side. This time around however the Renegades weren’t to have it their own way. The Blackhawks managed to score early on offence and their strong defensive play kept the Carnegie team out of the end zone for the first half and even managed an interception which was only kept from being a pick 6 by the QB Stuart Harwood making a tackle on the 1 yard line. They did however go on to convert this on offence and went into the half 13 – 0.
The Renegades managed to pull one back early in the second through a Stuart Anderson TD but after that the Newcastle team held firm on defence and their offence managed to put one more touchdown through to secure the game.

Game 2
Exeter Falcons 6 – 13 Carnegie Renegades
The Renegades had a single game break before playing their next 3 games back to back. In the second game of the day they were to come up against the hosts in the Exeter Falcons. The two teams had never met before so neither was sure what to expect and the game turned out to be a close fought affair. The Renegades took the lead with a TD by John Guthrie who is more accustomed to playing on defence but due to the small squad all players ended up on both sides of the ball at some point. The Exeter Falcons managed to pull back level at the start of the second half before a final touchdown of the game came with John Souter stretching into the end zone. Both defences held firm after this to close out the game with a 1 score difference.

Game 3
Carnegie Renegades 6 – 13 Old Boys Rebellion
The third game of the afternoon was against the reigning champions, and favourites to win, from the last time this tournament was played. The Old Boys went behind early with a missed tackle allowing Ross Dawkins to scream down the sideline into the end zone putting Carnegie up by 6. The Old boys quickly responded putting them up 6 – 7 over the Renegades going into the half. The second half was a defensive showdown with both teams going back and forth until an interception by the Old Boys set up a second score to secure the game in their favour.

Game 4
Carnegie Renegades 38 – 0 Cardiff Valkyries
At this point I would like to say that the reports of all these games are being done from memory and the only reason we have the scorers from the other games is due to the low scoring nature of these games making it easy to post quickly to facebook after each game with the names of the scorers. The reason behind this without naming names is that Player Coach defensive centre Ross Dawkins (oops I mentioned a name) may have or may not have (he did) dropped his open bottle of water onto the sheets we were to use to keep track of each games stats.

The Valkyries were playing their first ever games in this tournament being a new team to the sport and although the score line doesn’t quite reflect it they acquitted themselves admirably against some very tough opposition. This game started with the Valkyries actually making it to the end zone on one of their first plays after making the Renegades miss their tackles before being called back for a false start. After that the Renegades took over and I think it went something like this. Touchdown, Touchdown, Pick 6. The Renegades in the second half switched QB and also made some changes on both sides to allow players to play positions they weren’t used to. The second half proceeded similar to the first with Pick 6, Touchdown and a final pick 6 on the last play of the game ran in by Aly O’Mahoney and counted even though he was tackled by the ref at the 1 yard line.

Game 5
Cardiff Hurricanes 20 – Carnegie Renegades 14
The final game of the day only lasted a single half due to the timer on the flood lights running out and the pitches being plunged into darkness. By this point the Renegades were down 2 players with Stuart Harwood and Ross Dawkins both succumbing to niggling injuries from earlier games and being unable to take part leaving a depleted squad of 6 to try and steal a final win.
This game was played at a furious pace from the outset with the Hurricanes having the advantage of a larger squad the Renegades were always going to struggle to come out on top but managed to keep themselves in it until the very end.
The Hurricanes opened the scoring before John Guthrie caught a long ball into the end zone to even the scores. The Hurricanes numbers started to tell however and they scored two more in quick succession before Stuart Anderson found John Souter in the front corner to bring the Renegades within striking distance however the Hurricanes are an experienced team and managed to run out the clock on the next drive with the whistle going seconds before the lights went out bringing a great day to an end.

The Renegades record of 2-3 on the day secured them 4th place overall with most games only being decided by a single score. All the players involved thoroughly enjoyed a fantastic day of flag football all for a worthy cause and I’m sure I speak for the whole team when I say we can’t wait for the next tournament so we can make the trip again.