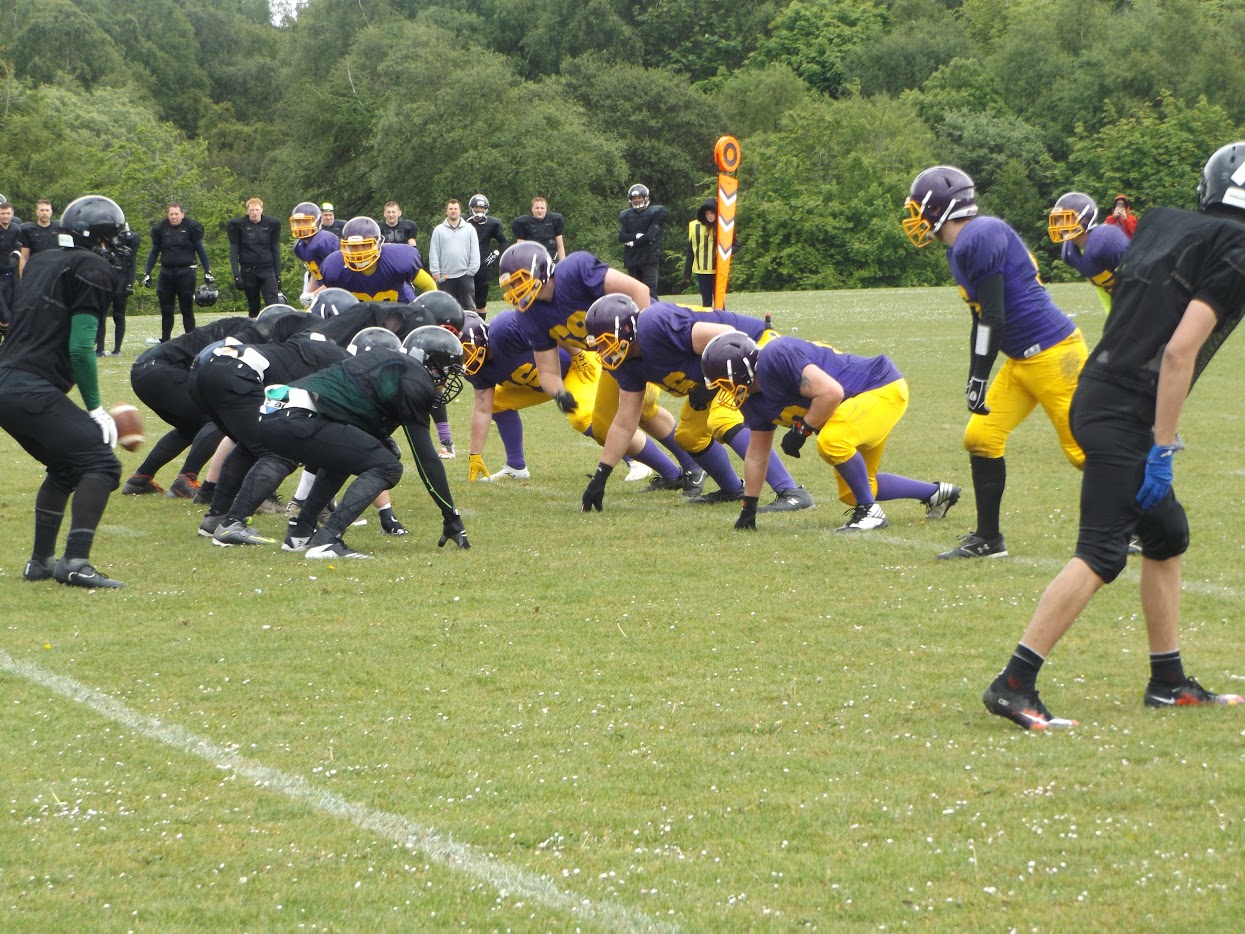 A wet and windy start to this friendly at Duloch Community Leisure Centre between the home team, Dunfermline Kings and the Highland Stags. This would be Highland’s first game in their existence. The rain quickly subsided but a slight breeze remained.

The Kings won the toss and elected to receive. Starting off with a good return from KR Gavin Cullen, back to the 50-yard-line, Dunfermline’s offense took to the field. A few short runs led to the Kings going for it on 4th down. A stout defensive showing from the Stags. Turnover on downs.

Highland took to the field for their first offensive drive of the day. With quick successive rush attempts, the Stags gained multiple 1st downs. Forcing the Kings Defense to adjust their gameplan. The Stags began to find a rhythm on their well drilled O-line, finding the first touchdown of the day on an outside run. 6-0 Stags. The Stags would fail to convert the 2-point conversion. 6-0 Stags.

Stags kickoff. Touchback for the Kings. Starting from the 20-yard-line the Kings struggle to kickstart their drive. Consecutive losses on run plays left the Kings Offense with their backs against the wall. 3rd and long. Incomplete pass from QB Daniel Picton. Dunfermline would elect to go for it on 4th Down. A smash mouth front 7 from the Stags pinned the Kings in their own endzone. Safety. 8-0 Stags.

Dunfermline kickoff due to the safety. A miscommunication on the Stags Return team as one of the Kick Returners touches the ball outside of the endzone failing to recover it. The ball is recovered in the Stags endzone, resulting in a Safety for the Kings. 8-2 Stags.

Kings ball after a short return. The Kings Offense had some time left in the Second Quarter. QB Daniel Picton would once again struggle as the Stags provided plenty of pressure, breaking through the line multiple times. 3rd and Medium, Pass to WR Cammy Scott, leading to a 1st Down. The Kings had some life left in their drive. Running Back Committee, Krzysztof Górzkowski and Yoann Hubert would struggle also behind the woes of the Kings O-line. The Stags stout Front 7 would make it a long day for the Kings Offense. The Kings would be forced to Punt, failing to gain another 1st down in the half. Stags Ball with good field position. The Kings Defense had made some slight adjustments and seemed to keep the Stags Offense at bay for the remainder of the half. Halftime Stags 8-2 Kings. Dunfermline needed some adjustments across the board.

Third Quarter. Dunfermline kicks off. Stags return to the 40-yard-line. Highland’s Offense takes the field. The Kings made some adjustments on Defense at the half to better deal with QB Chris Shaw and the Stag’s Offense simple yet effective Double-Wing Offense. Highland would have a tougher outing this half with their Offense. Kings force a Punt. QB Picton would the lead the Kings onto the field with good field position thanks to PR Michael Orr and the Kings Punt return team. RB Górzkowski would break off a 20-yard run giving life to the Kings Offense, 1st Down Kings. Using this momentum the offense attempt some passes. One completion to WR Cammy Scott and an incomplete due to pressure on QB Picton. 4th and Long. Unsuccessful 4th Down conversion. Turnover on Downs.

Stags ball. Once again Dunfermline’s Defense would make it a difficult outing for QB Shaw and the Stags’ Offense forcing another Punt. PR Michael Orr makes a risky grab on a short punt setting the Kings’ Offense up on their own 35-yard-line. The Offense would struggle to get some momentum on this drive. Losing yards on Penalties and tackles-for-losses, the Kings would be once again pinned in their own endzone. A tough showing on 4th Down by the Stags’ Defense. QB Picton tackled in the Kings endzone. Safety. 10-2 Stags.

Dunfermline kickoff. Blown kickoff coverage by Dunfermline allowing the Stags to capitalise with some solid blocking and a Kick Return Score from Stags KR Mark Betts. 16-2 Stags. The Stags elect to go-for-2. Unsuccessful on the attempt. Still 16-2 Stags.

Stags Kickoff following their TD. Touchback Kings. Starting on the 20-yard-line facing a three score game, the Kings offense would need to start off strong on this drive. QB Picton would struggle once more against the tough blitzes from the Stags’ defense. Following another Sack on QB Daniel Picton. The Kings would turn to RB Yoann Hubert. Tough downhill running from Hubert gains the Kings a 1st down. There is still fight left in the Dunfermline side. The momentum is ended quickly by the Stags defense forcing two consecutive Incomplete passes from the Kings. 4th and Long. The Kings Offense lines up once more going for the score. Deep pass to WR Cammy Scott is just overthrown. Turnover on Downs.

Stags’ Ball. The Stags, capitalising on the momentum and good field position provided by their Defense quickly gain consecutive 1st Downs. The Kings defense seemingly on their heels, struggle with poor field position and some agile runs from QB Chris Shaw and RB Scott Maclennan. Sideline-to-sideline runs from QB Shaw tiring out the Kings Defense. A designed QB run from the Stags leads to a Highland TD. 22-2 Stags. 2-point conversion from WB Mark Betts makes it a 24-2 game.

Kickoff Stags. The Kings requiring a monumental effort to get back into the game, blocked excellently on their Kick Return. KR Michael Orr gaining 60-yards setting up the Offense in great position. The Kings Offense takes to the field. RB Górzkowski breaks off another tackle-breaking run deep into Stag’s territory to end the Third Quarter.

Changing sides, the Kings carry their momentum into the Fourth. 1st Down on the Stags’ 23-yard line. QB Daniel Picton looks to set up a pass following some run-pass-option plays, finds no one open and the pocket quickly collapsing. Picton evades multiple defenders and runs it in for a Kings’ TOUCHDOWN! 24-8 Stags. The Kings 2-point conversion would be unsuccessful. 24-8 Stags.

Kings Kickoff. Stags Touchback. Highland’s offense takes the field hoping to end the Kings newly found momentum. The Kings defense remain tough and put a stout effort to minimise the Stags gains. The Kings Linebacker Corps kept the Stags Rbs at bay forcing a quick 3-and-out leading to a Punt. A short Punt out of bounds from the Stags leaves the Kings on their own 35-yard-line. Dunfermline takes to the field still with some hope they can string a drive together and make this game salvageable. The Running back tandem of Hubert and Górzkowski strung together a meaningful drive with run after run. Short pass attempts fell incomplete as the pressure of the Stags D was stifling. A catch from WR Cammy Scott for short yardage was brought to a halt with a targeting call on Stags LB Billy Mill leading to an ejection. Mill had been an important part of the Stags Defensive effort. Kings ball in the Stags half after the penalty. Due to penalties of their own however, the Kings would be moved back into their own half. A failed 4th Down conversion lead to Turnover on Downs. Stags Ball.

The Stags final drive would end the game with a few short runs and penalties delaying the final whistle. Kings fall to the Highland Stags 24-8.