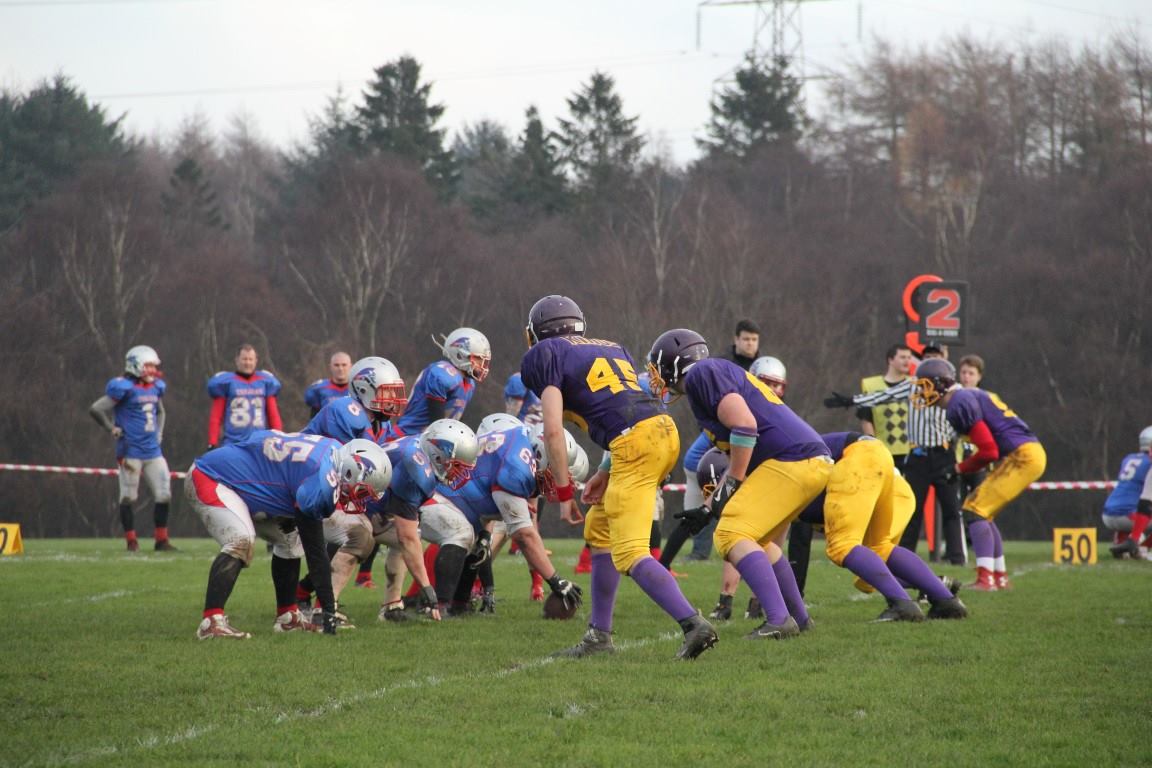 Saturday 3rd of December 2016 was the final game of the Associate process for your Dunfermline Kings. This time it was a step up in competition with them taking on Division 1 team The West coast Trojans.
The Dunfermline Kings hosted the Trojans at their home park at Duloch Leisure Centre in Dunfermline where they were looking to make a statement against a team who would be playing a division above them in 2017.

The game started with the Kings receiving the ball and the intent to run the ball was clear although with little success. Quarterback Daniel Picton threw to TE Rab Mcdowell on and out route which was picked off by number 5 of the Trojans and run in for a Touchdown!… the worst possible start for the Kings.The Trojans proceeded to miss the 2 point conversion and with the score 6-0 to the Trojans the Kings would receive the ball back.

The Kings having regrouped started to get their offence going and started to move the chains. Having escaped the pocket QB Daniel Picton found WR Mark Hutton on a fade route for a 30 yard gain and now a first and goal. After a couple of failed attempts to get the ball into the endzone QB Daniel Picton found his TE Mark Boswell on an out route and he ran it in for a touchdown!! 2 point conversion was missed 6-6.

Both teams suffered a couple of 3 and outs with both defences being on top form seeing the 1st quarter end 6-6.

The 2nd quarter was very evenly matched with both defences dominating play. QB Daniel Picton was finding a lot of success running himself for first downs but the kings Offence just couldn’t convert that into points. The Trojans started to get their wide receiver no.87 into the game with some explosive plays, and at the end of the quarter the Trojans QB found his man no.87 on a 20 yard pass who then ran it in for a Trojans touchdown. 2 point conversion was then converted and this would be the final score before the half with the Trojans now up 14-6.

After halftime the Kings came out in high spirits knowing they had hung in there with a much more experienced team and it was only a one score deficit and the third quarter was similar to the second with the defences of both sides forcing 3 and outs.
The Trojans managed to score at the end of quarter with no.87 catching another pass for a touchdown. No.87 was showing his experience and giving the kings Defensive backs a hard time. Trojans missed out on another 2 point conversion making the end of the 3rd quarter a 2 touchdown game going into the 4th with the Trojans now up 20-6.

The 4th quarter was where the Trojans really showed their experience and started to turn it on mixing it up with the run game. Running back no.46 managed to find gaps in the defence on two occasions which ended up in touchdowns taking the score to 32-6 to the Trojans. With time expiring fast the Trojans punished the Kings Defensive backs with another deep pass which was caught by?….. yes that man again no.87 for a Trojans touchdown!

The Kings were still in high spirits knowing the game was a lot closer than the score suggests. Having took on a far more experienced team and competed with them throughout. Morale was still high.
Having completed the Associate process the Dunfermline Kings look forward to league football next year in the national leagues Division 2.
The kings would like to thank the Dumfries Hunters, Clyde valley Blackhawks and the west coast Trojans for helping with their associate games.