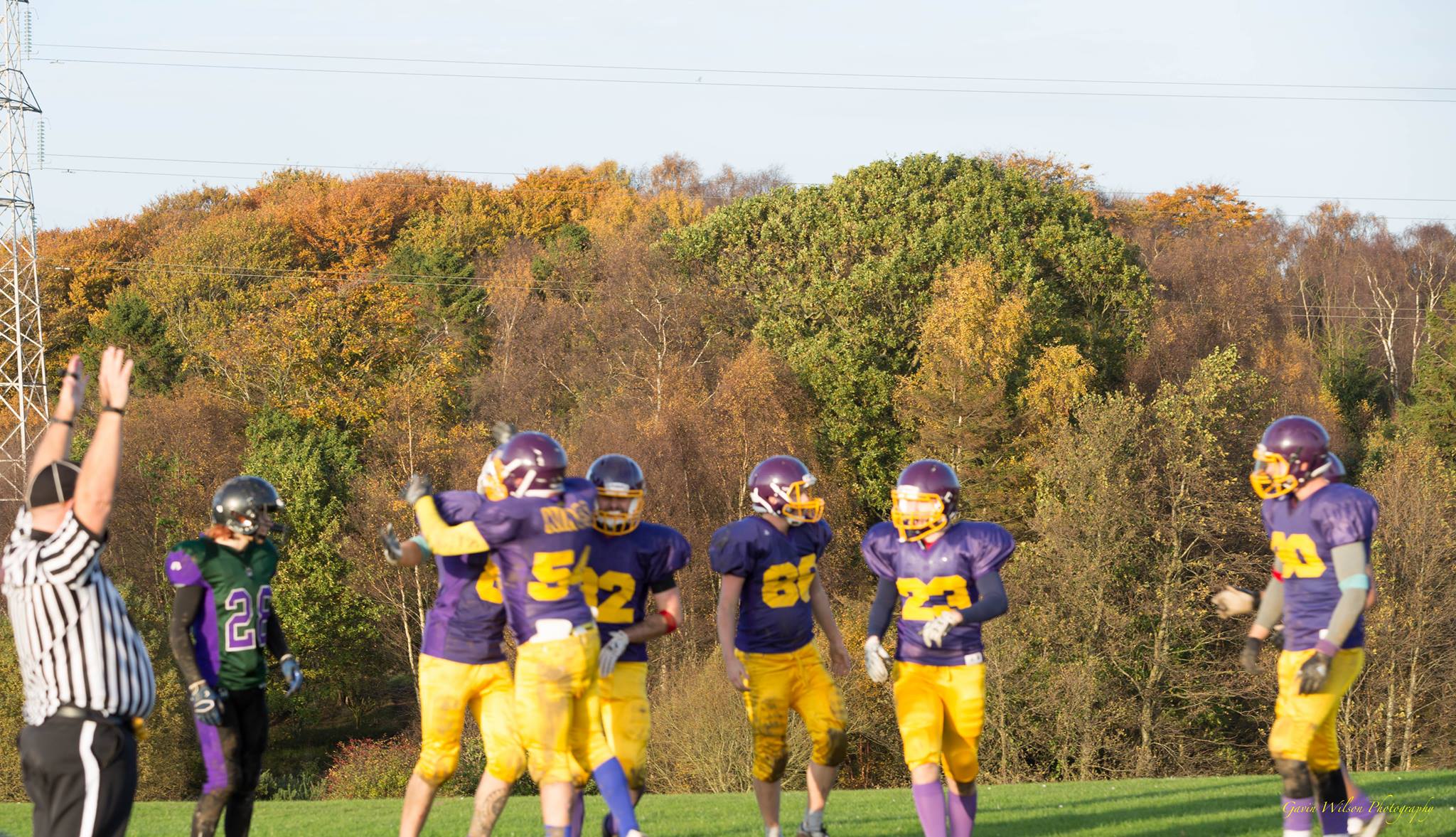 Sunday 30th of October seen the Dunfermline Kings make their home debut when they took on the Dumfries Hunters in an associate clash at Duloch park.

The scene was set for this clash between two new teams with similar aspirations of league football in 2017. Dumfries made the journey to the home of the Kings in the hope of disappointing the home support.

The game started very shaky for both sides as neither team could get their offence going, the Hunters quickly showing their intent by refusing to punt on 4th down and instead deciding to go for it by handing off to their full back. The Kings defense was up to the task though stopping the Hunters short and getting the turnover on downs. The kings offense still struggled to get going with quarterback Daniel Picton having to deal with the blustery conditions at Duloch. The Kings tried to run the ball more but the Hunters were up to the task packing the box and stopping the run, forcing the Kings to punt from their own half. The Kings punted and a fumble from the Hunters punt returner had wide receiver Scott McCracken diving on it only for the play to be brought back for a penalty flag. The Kings were now punting from their own goal line and with a sliced punt by Iain Wainwright the ball went out the side of the end zone giving the Hunters a 2 point safety! The second quarter was more of the same with both teams getting penalised heavily from the officials. The Kings defence done a great job stopping the Hunters offense with 2 sacks from defensive end Juraj Kollar and a tackle for loss from linebacker Andrew Drysdale.

At half time it was 2-0 to the Dumfries Hunters in a very closely fought game. The Kings got fired up knowing they could stop the Hunters offense but needed to get the their own offense going. Left tackle Donald Taylor got the hype chant going “Who Da Kings” and the team went out motivated to deliver.

3rd quarter seen quarterback Daniel Picton take more chances with the passing game throwing and finding slot back Cammy Scott on an out route in which Cammy juked one defender and stiff armed his way past another two defenders for a 30 yard gain!…. Wait there is a flag on the field. Illegal block in the back, offense and the play was brought back. Although the penalty had countered Cammys  fantastic run this was a turning point in the game as the Kings offense got going.  With the Hunters now having to think about the passing threat the Kings managed to get the run game going. Some superb run blocking from the offensive line opened up holes for running back Stephen Nicol to exploit making some short yardage gains. Late in the 3rd quarter, quarterback Daniel Picton hit wide receiver Scott McCracken on a fade route and with a superb catch in which he aggressively attacked the ball ran for 80 yards and set up 1st and goal for the Kings as time expired for the quarter.

4th quarter started with the Kings on 1st and goal and after a couple of short yard gains soon found themselves 4th and goal. QB Daniel Picton got the Hunters defensive line to jump offside with his snap count audible setting up a free play. Daniel rolled to his right pump faking to make the defensive backs bite on the pass and ran it in to the endzone himself.  TOUCHDOWN KINGS!

With just over 4 minutes to go in the game the Dumfries Hunters still have no answer to the ever vigilant Kings defence so they start to take more risks by throwing the ball deep. With a couple of near picks from safety Grant hill the Dumfries quarterbacks luck was on borrowed time as wide receiver Scott McCracken who went on to play defence, read his eyes and with a perfectly timed interception ran the ball in for a pick 6!  14-2 to the Kings!

The Kings once again go for the 2 extra points, running the ball with slot back Cammy Scott who tried to bump outside from a tackler but was unable to get over the line.

The Kings then run the clock with hand offs to RB Stephen Nicol. Time expires and it’s a home win for your Dunfermline Kings ending 14-2.

The Kings dedicate this win to little Ellie and Coach Paterson.