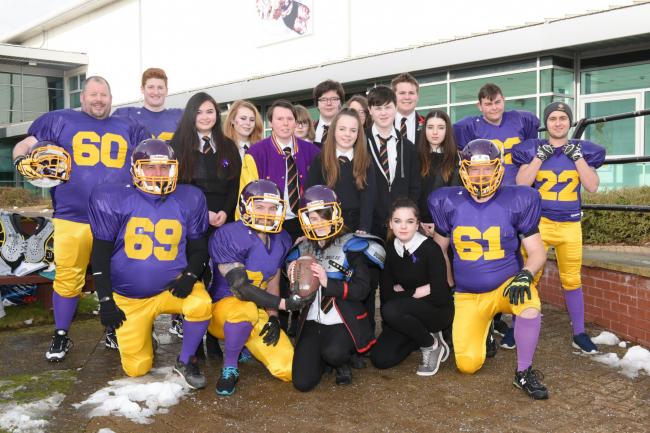 PUPILS at Queen Anne High School have launched a Lesbian, Gay, Bisexual and Transgender (LGBT) group to raise awareness of the importance of equality within education.
The group provides a safe space for school students to discuss equality and support those who find education a struggle due to bullying.The idea was put forward at the start of the academic year and they now meet weekly on Monday lunchtimes.

Geoff Nicholson, teacher, is proud that a group has been established and that dozens of young people are attending every week.He said: “It’s crazy and totally wrong that some young people face barriers to education.”All pupils should have full access to education free from any stigma.Bullying can lead to barriers starting to emerge which can isolate pupils from going to classes.From there, they may not have the qualifications needed or the social skills required to progress and move in a positive direction away from school.The vision is to create a norm that means that homophobia is the clear minority. There is still name-calling and harmful language in schools.Teachers are becoming more aware of the issues and it is getting handled better. We want to make homophobia taboo.As teachers, we have the responsibility not to stay silent and stress how important equality is.We also want pupils to report anything they see or hear and not to accept it when it happens.”

Members of the group have stressed the importance of fellow pupils not being excluded or made to feel uncomfortable in the school grounds.
He said: “For the school, it’s great to be highlighting the LGBT group as one which promotes themselves and good causes, as well as groups who are doing similar work.It’s an open group that allows anyone to drop in, it gives young people a foot in the door to discuss equality.It’s a big statement being made by the school to admit that work not only needs done but to be the ones to help raise awareness. We’re prepared to champion the discussion on that.”

The group joined forces with the Carnegie American Football Association to promote the need for equality in sports where everyone, no matter the gender, can take part.
Geoff added: “It’s great that Dunfermline Kings want to be seen and recognised as a sports team who welcome all players and for them to then feel comfortable as part of a team.”